Carteret, NJ – Mayor Daniel J. Reiman invites the public to “Food Trucks for Fire Trucks,” a benefit hosted by the Borough of Carteret to raise money for the storm victims of Guaynabo, Puerto Rico. The event, being held Thursday, May 10 from 5:30 pm -8:00 pm at the Thomas J Deverin Community Center at 100 Cooke Ave in Carteret, is free to attend, with donations optional.

Food trucks including Romano’s NY Style Hot Dogs, Maglione’s Italian Ice, Webb’s Worldwide Sandwiches, I Love Juice, and Get Fed by Ed will be featured (subject to change), as well as authentic Puerto Rican live music and dancing by Demaris Isales , a DJ, and fire trucks.

“I have a special place in my heart for the beautiful island of Puerto Rico, which I often visit. Though the island and our fellow citizens have come a long way, there is so much more that needs to be done,” said Mayor Reiman. “Our donation of two fire trucks and any additional funds we raise at this fundraiser will assist in safety operations and hopefully bring some relief to our fellow citizens in Guaynabo.”

The Borough of Carteret donated two fire trucks to Puerto Rico – a 2001 American Lafrance 2000 GPM six-man cab rescue pumper and a 1998 100′ American LaFrance tower ladder six-man cab ladder truck –  which were shipped last week. The trucks have not been used in service since being replaced by a 2015 Pierce Arrow pumper and a 2015 Pierce Arrow ladder truck in 2016. Since that time, they have been in storage in Pennsylvania at an emergency vehicle resale and retrofit center.

Puerto Rico’s sole representative in the U.S. Congress, Congresswoman Jenniffer Gonzalez Colon, thanked the Borough of Carteret in a heartfelt message last week, stating “On behalf of my constituents, the 3.4 million American citizens of Puerto Rico, and particularly close to 100,000 residents of the Municipality of Guaynabo, I want to express my sincerest gratitude to Mayor Reiman, the Carteret Borough Council, Fire Chief Mark Hruska, and our fellow citizens of Carteret for their donation of two fire trucks that are so desperately needed on the island.”  She continued by ensuring “Believe me, these fire trucks will be put to very good use.”

In September, Mayor Reiman and the Carteret Public Library organized the Carteret Cares Natural Disasters Relief Drive, which raised $3,750, along with clothing, pallets of water, and other needed items for storm-ravaged areas including Puerto Rico, Texas, Florida and Mexico. The Mayor’s Charity Trust Fund also contributed $5,000 toward relief efforts.

To find out more about the donation and the Borough of Carteret, visit www.Carteret.net. 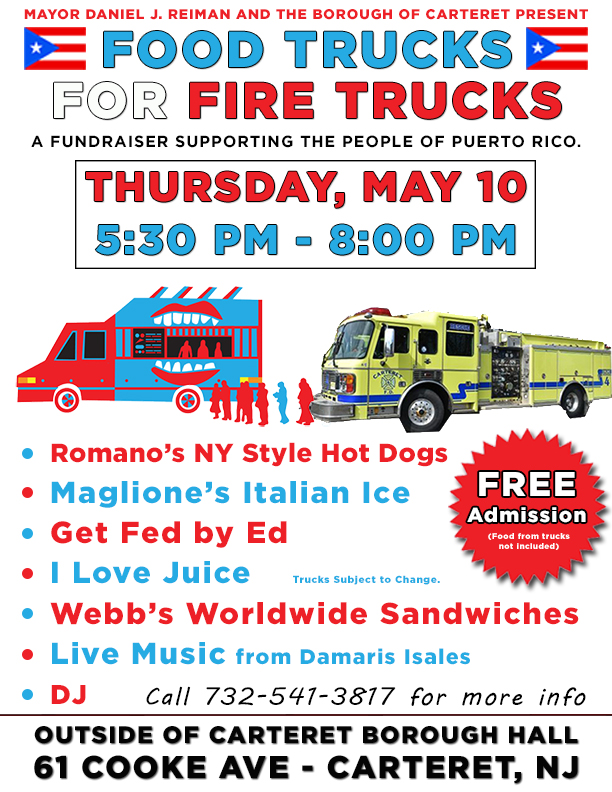